The Strategic Planning Steering Committee held a public forum last week to discuss diversity and inclusion on campus. The forum is a part of their strategic planning process, in which they hold open conversations that delve into their targeted themes for the plan, including “Enrollment, competition, and cost,” “Academic excellence and well-rounded student experience,” “Community, service, and collaboration,” along with “Diversity and inclusion.” The Rambler sent three reporters to cover the event in an effort to raise awareness of the strategic planning process and student responses to it.

The forum was guided by an introductory activity in which attendants walked around the Faculty and Staff lounge and responded to questions written on posters hanging on the walls. Participants wrote their personal experiences and thoughts on the papers, adding check marks and stars beside other responses that resonated with them. After everyone took their seats, Hannah Piechowski, the Director of Student Transitions and Parent and Family Programs, read off the written responses, opening the room to discussion and additional commentary on the specific poster.

What are Transy’s greatest strengths related to diversity and inclusion?

For this question, students wrote comments such as “A majority of the staff seem to know the value of diversity and inclusion, even if they don’t know how best to achieve it,” and “The exposure students get of different people and open-mindedness that a liberal arts education encourages.” However, the question, which initially refreshed some individual’s attitudes towards campus, quickly exposed the frustration of students and faculty in regard to diversity and inclusion.

Following King, senior Blake Taylor commented on the lack of student presence during the first Diversity and Inclusion forum the previous day. “This is no shade, but there were only about ten of us here yesterday, and there were only ten of us from the same class that was organized in our own class time. Yeah,…what really makes change is showing the fuck up-” said Taylor. Johnnie Johnson, the Director of Operations and Multicultural Recruitment, interjected in his comment to request clean language. Mr. Johnson repeated the request throughout the forum, though it was ignored by Taylor.

Taylor continued, emphasizing how students of privilege do not have the same experiences of students of a diverse background. “Just showing up. And I think that’s happened today, which is great, but I think some of those remarks on those pages, I think, sugar coat and don’t necessarily, may not come from students who represent our diverse body, and therefore may not encounter the negative aspects of campus that are on the campus when you immediately arrive,” said Taylor.

What are our best opportunities for Diversity and Inclusion?

Written on the poster were comments that reflected the frustrations of the student body, such as “Punish those who act out in hate of diverse populations and students,” “anti-racist, anti-oppression training for faculty, staff, students every year, all and mandatory,” and “ongoing support of diversity initiatives, not just reactionary measures.”

First-Year Zach Hall suggested in both forums that a specified list of faculty who are safe to confide in is a necessity, rather than an opportunity for diversity and inclusion. “I know we spoke about it yesterday, but we need to know who the faculty are, I don’t think all the students know which faculty they can talk to about these issues,” said Hall. In response, Dr. Kremena Todorova, Associate Professor of English, recognized Mr. Hall’s comment as a problem within itself. “We need to know which faculty are safe to talk to, which I think supports one of these ideas of the anti-racist, anti-sexist, anti-oppression training for everyone including faculty. Because you wonder who you can talk to,” said Dr. Todorova.

Students also feel that opportunities for diversity and inclusion lie in the curriculum. Michelle Rawlings, of the registrar’s office, claimed that classes that delve into diversity and inclusion or represent minority scholars have the lowest enrollment rate. Senior Erin Alexander stressed that promotion for these courses is necessary to achieve a high enrollment. “These classes exist. I’m in a Black Feminist Theory class right now with four people. These classes exist, they are out there,” said Alexander.

By contrast, senior Paola Garcia mentioned that students are being restrained by general education requirements, and that diversity needs to be “interwoven into every section of our curriculum.” “I think the problem is not that people don’t hear about it, the want for these classes is not the problem. It’s all of our GE’s, all of the other stuff we have to do,” said Garcia.

What do we want our future to be like in regards to diversity and inclusion?

Student’s continued to express their dissatisfaction with the progress of diversity and inclusion as the conversation developed, noting disappointment particularly with higher administration. Written on this question’s poster were comments such as “To actually have [diversity] rather than just talk about getting it,” “more active and open conversations about our problems in a public space,” “we need transparency when it comes to administration,” and “prevention of tokenism,” which is “the policy or practice of making only a symbolic effort (as to desegregate),” according to the Merriam-Webster dictionary.

Students referenced, though did not explicitly cite, events that occurred on campus in the previous years that the administration has avoided discussing with the student body. “Especially in the past two years there’s been instances have sort of put a public eye on Transylvania and the problems that we have, and there’s been a real strong effort by the administration to silence anybody who’s trying to say anything,” said Hall. “I think there needs to be a more open dialogue between with anybody that we want to talk to, without any policing for what we want to say because our voice matters, and I don’t think we should be policed at all.”

“I think this should particularly start from the top down because when you’re receiving emails from the president saying this is who you can and can’t talk to, it already stifles any sort of positive dialogue we could potentially have,” said Hall.

Where, when and how have you felt most included/excluded on campus?

Students identified inclusive spaces as Greek life, on their specific athletic team, and in the cafeteria. Garcia also added that “the professors do a really good job of providing an inclusive space [for students.]” However, the forum was forced to move on from discussing inclusive spaces on campus to exclusive ones, as students focused on the prevailing isolation they experienced. One student wrote that “Transy is not a hospitable environment for those that do not fit the majority, our voices are appropriated and exploited for the benefit for the academic saving face,” and that they felt most excluded when their “pronouns haven’t been used.”

The spaces that some students wrote were inclusive, such as Greek organizations, are also considered exclusive to others. “I was in a fraternity for three years. I was recently expelled, aye represent. I was in a lot of those rooms where voting processes take place, and I can honestly say, you can consistently see it become more a white, straight, male over a period of time. When I did enter the space, it was one of color. That’s always worried me, to see that even that body has changed over time to consistently really stick to bringing in people that look like them,” said Taylor.

The forum spilled 30 minutes over the allotted hour for discussion, and stopped right before open commentary for the last question, being “where have you seen exclusion on campus?” Students have the opportunity to fill out a survey on the forum and may also email and contact any member of the diversity and inclusion work group. A list of its members is below. The work group plans to use the information gathered from the forum and other outside focus groups to publish a diversity and inclusion write up in May. “That’s a ton of information, and we cannot solve all of those problems today, I am human! So, we’re going to, as a work group, figure out the best way to present all of that information,” said Piechowski.

The discussion reflected a disheartened student body and faculty, one that simultaneously demands action and doesn’t expect it past the diversity and inclusion forum. The campus now waits for the release of information in May from the diversity and inclusion work group and for the next steps of the strategic planning committee. “I’m in the working group [for diversity and inclusion], and I’m not convinced that things will happen. I don’t know if these changes will happen, we’re talking major, major changes to our campus culture. It requires commitment and funding, and until I see it I won’t believe it. Talk to me, but I can’t promise you change, unfortunately,” said Dr. Todorova. 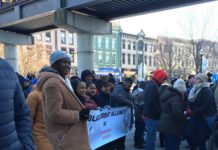 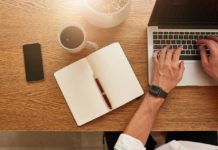 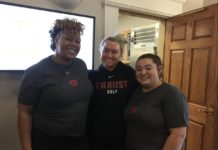