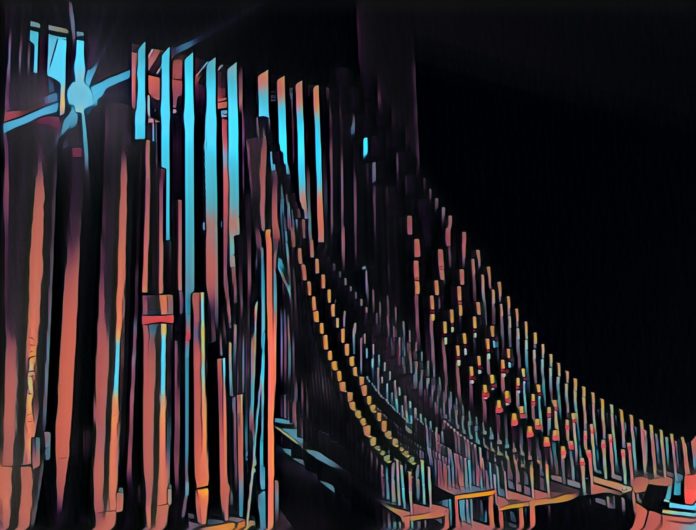 For most of the art, music, and theater students here at Transy, the Mitchell Fine Arts building is like a second home. Mitchell Fine Arts’ Haggin Auditorium is also home to a grand instrument that sits above the rows of seats.

When I first heard about the possibility of doing a piece on the organ at Transy, I was a bit unsure of where to start. What kind of questions would I even ask? Don’t most people already know, basically, what an organ is and how it works? Naturally, I had to ask an organist.

“People come in for different things in the auditorium here, and they just see this big thing up here, and they never really get to see what it can do.” Allen Fletcher is a rising senior and a double major in history and music performance. He is also the first organ performance major that Transy has had in twenty-five years. As a result, he is one of the few people actually familiar with the organ that looms over Transy’s largest auditorium. Transylvania is one of the few colleges in the state that still offers organ lessons, as UK just recently cut their organ program following the retirement of the instructor. 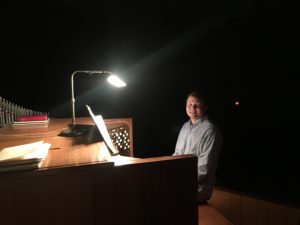 For Allen, “Music is a kind of de-stressing thing. It’s a way to get away from all the work and school stuff.” I can attest to the relaxation qualities music brings, being a musician myself, as I am sure other music students can as well.

Fletcher said that being in the auditorium during the early morning hours when it’s quiet is also relaxing. “I usually come here in the mornings because I have to make sure nobody’s using the auditorium. So I come in here, and it’s usually pitch black, and I just get to be here for an hour or whatever, and just be alone, and it’s nice.”

One of the first things Fletcher showed me about the organ was the type of special shoes that are required in order to play the instrument. “One thing a lot of people don’t know is that you actually have a pedal board where you can play notes with your feet, so you actually have to wear these special shoes, and they’re kind of goofy looking. They’re really narrow, and they’ve got this heel on the bottoms so you can play with your heel and your toes. They’ve got a leather thing on the bottom.” The shoes looked almost like old-fashioned tap shoes, and they add another interesting fact about playing the organ. The organ is a highly fascinating instrument, or as Fletcher put it, “It’s kind of a mysterious instrument. You can sit here and play notes with your feet, and play a melody with your feet, and have your hands right here. I think that’s one thing that makes it so interesting. Not a lot of people are really familiar with it.” 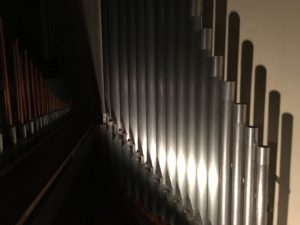 The instrument is responsible for a phrase people often use. To quote Fletcher, “If you’ve ever heard the phrase ‘pull out all the stops’, that’s where it comes from.” Fletcher proceeded to show me how he makes the sounds using stops, which consists of pulling several out at one time. He explained that if he pulls a bunch of stops out at one time, it creates a full, large sound, compared to when he pulls out only a few stops, which creates a smaller sound. “There’s what we call principal stops, which are unique to the organ. They’re kind of the typical pipe organ sound. Then you have some that try to kind of imitate other instruments, like there’s flute sounds, and then you have what are called reeds, and this would be like a trumpet sound. Then you have string sounds. So you’ve got all these different imitation stops. If you only have only one [stop] pulled out, it can be really pretty soft, but if you want to get a big sound, you can pull out a lot.”

There is also something called the crescendo pedal. Instead of having to take the time to pull out all of the stops, it helps the organ increase its volume much more quickly.There are also buttons for preset stop combinations so that the person playing it doesn’t have to pull out, as Fletcher put it, “fifteen different ones [stops], you can just press a button.” 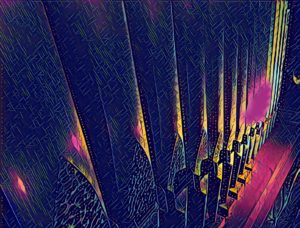 The vast number of pipes required to produce an organ’s unique sound makes it a monstrously large instrument.

Although Fletcher has a background in piano, he says that playing the organ is still a challenge. “I am still getting the hang of it. I’ve played [the organ] for about two years now and played the piano for a lot longer.” He said this has helped him a great deal when learning the organ. “I’ve been playing the piano since I was six, and I played the organ a little when I was growing up, but not very much. I took lessons one semester here a couple of years ago, and I loved it. I’ve just been working at it ever since.”

Fletcher played several pieces for me, and I listened in awe. Not only was he playing the melody with his hands, but his feet were playing a melody on the pedals below. “For me, it’s a lot more difficult, just because you’ve got your feet to think about. I used to think that playing the piano with all these notes was hard, having to read treble clef, bass clef, all these notes. Then you get to the organ, and it’s like, you have to play with both hands, and you have to play with both feet too, so now you’re reading one, two, three staves of music at one time. It’s difficult, and I’m still getting the hang of it.”

After he played a few pieces, Fletcher explained that there is, in fact, a learning curve when it comes to the difference between playing the piano and playing the organ. “You have to kind of get acquainted. I know the first time I came up here, I had no idea what any of this stuff meant, and I pressed all these notes and nothing came out. So there is a little bit of a learning curve to it, and it’s almost essential that you have some kind of piano background.”

When asked what made him decide to learn the organ, Fletcher said, “It’s something different. I played the piano for so long, and the organ is the same principal, but it’s different in a lot of ways. It’s kind of mixing things up.”

“I started the organ a couple of years ago, and I just really took to it, and really have gotten to know the teacher here, so I decided to add a music major.”

“I decided to do an organ performance major, and I think they said this was the first organ major they’ve had in twenty-five years.” Fletcher said he took the performance major “just kind of for the heck of it”.

Fletcher said that Transy’s organ instructor, Richard Dwyer was one of the reasons why he likes playing the organ. “I’ve really gotten pretty close with him, [Dwyer] and he’s really been one of the main reasons why I’ve taken to the organ so much. He’s a really fantastic guy.”

Fletcher grew up around the organ and heard it played in church.  “Growing up, I would go in churches or different places, and I would hear people play the organ and I was like ‘wow, that’s really a grand instrument.’ It’s called the king of instruments, and now I kind of see why.”

“I actually played the piano for my church when I was growing up, so I’ve got some experience with that. A church job would be a good kind of side job in the future. That’s one reason I’ve really taken to the organ.”

This year marks the 50th anniversary of Transy’s organ. Fletcher said it has had a few problems over the years, such as various things like a broken pedal board (that has since been rebuilt), tuning issues (the organ has over 2,000 pipes), and keys that stick together among other ailments. The most expensive thing is getting the organ tuned, Fletcher said. “It’s really expensive to go through 2000 different ones [pipes]. It’s not a cheap instrument, but it’s in pretty good shape.” Although there was obvious wear and tear from years past, the organ seemed to be in remarkable shape for its age.

The organ seems to be an instrument fading in popularity. Fletcher seems to realize this. “It’s kind of a dying art in a lot of ways. Like I said, churches are really the only place you see organs anymore, and even churches aren’t using organs that much. They’re starting to use drum sets and guitars, and more contemporary stuff.”