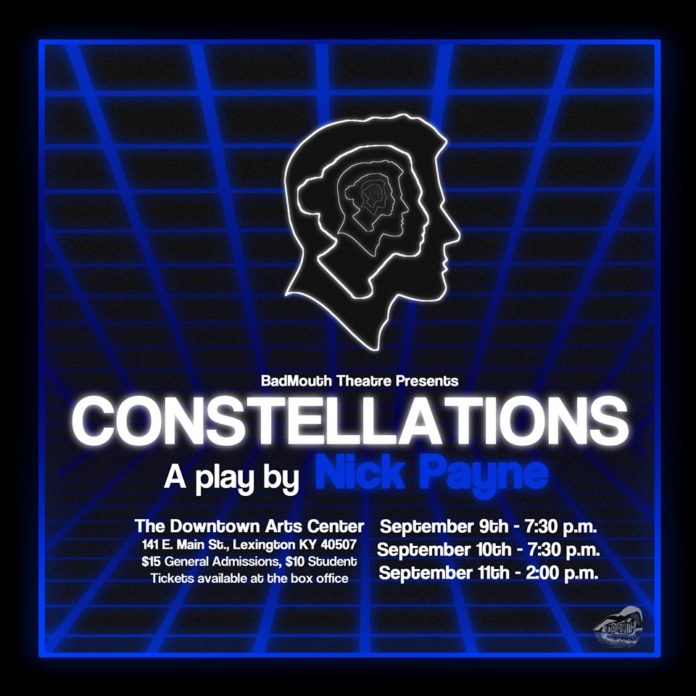 From the living room of the North Upper Street house to the stage at the Downtown Arts Center, BadMouth Theatre Company is paving the way for young artists in Lexington. BadMouth opens their first production, ‘Constellations’ by Nick Payne, on Friday, Sep. 9. The production has taken over a year to get here, but it has finally arrived.

BadMouth prides itself on being entirely operated by young artists. Founder, artistic director, and Transy junior Blake Taylor, a Transy junior, and the other “Badmouthians” are currently attending college. With a cast and crew in their early 20’s, much of their initial conversations were held in between classes and late at night in dimly lit dorm rooms.

In an e-mail interview with Taylor, he shared with us the moment BadMouth was created:

“[Transy junior Joe Bahena and I] were discussing how we wanted to create a collaborative theatrical group with our friends and I simply responded with a ‘Let’s do it,'” he wrote. “I’ve/we’ve found that the real work begins after you decide you are really going to do something with what you have ‘founded.’”

“Where else are you going to get theatre for young adults by young adults?” said Bahena. “That’s the missing piece that many established American regional theatres can’t seem to figure out.”

BadMouth was created in part to fill that void. Taylor adds that he aimed to achieve three things: “Provide my friends and young people alike with a safe space to create and feel supported. Create quality and moving art for the Lexington community.” and, “Have a good time!” In the long term Taylor says, “I want Badmouth to change the face of Lexington Theatre.”

Why should you see ‘Constellations’?