After a team climbs the mountain that is winning a Super Bowl in the National Football League (N.F.L.), it is customary to yell, “I’m going to Disney World!” And why not treat oneself to a vacation to the happiest place on Earth? After all, the journey to the Super Bowl is considered one of the most brutal in all of sports, alongside that of the legendary Stanley Cup in professional hockey. For the Philadelphia Eagles, this is their first successful completion of this treacherous journey. The city of brotherly love, the rough and tumble city that gave us Rocky, cheese steaks, the Declaration of Independence, and the Fresh Prince (all of equal importance) was finally able to produce a Super Bowl championship team as well.

While the team is rightfully basking in their accomplishment (and perhaps headed down south to see Mickey and Minnie), there is one trip that some Eagles players will not be making: the customary trip to the White House to meet the president and to be congratulated on their achievement. This visit to the most famous house in the United States has been a tradition for Super Bowl champions that started in 1980 under President Carter’s administration, and it became a regular occurrence during President Reagan’s tenure. Generally the public regards this visit as a tremendous honor and privilege. So, naturally, one must ask: why would someone pass up an opportunity to meet the leader of the country in his or her own house?

Although this is a fair question to ask, it is first important to remember that the precedent of athletes skipping a visit to the White House to meet the president is not a new one, nor is it a partisan one. Matt Birk, former center for the Baltimore Ravens, refused to visit the White House in 2012, citing his disagreement over President Obama’s stance on Planned Parenthood. In 1984, Larry Bird declined a visit to President Reagan’s White House, simply saying, “If the president wants to see me, he knows where to find me.”

So, why is this year any different? Why write a story about something that happens almost annually? Well, the reason for this story is pretty simple; this year there has been direct and public disagreement between the President of the United States and athletes who play in the N.F.L.

If you’ve been living under a rock the past couple of years, I’ll fill you in on the nature of this disagreement. For the past couple of N.F.L. seasons, many players have been protesting what they feel is social injustice by kneeling, raising a fist, or locking arms during the pre-game playing of the National Anthem. These players are protesting the treatment of people of color in the U.S. by law enforcement officers. Although many citizens support these protests, many people have deemed them disrespectful, uncalled for, and unpatriotic. The most notable critic of these protests has been our current president.

President Trump has been very outspoken and unapologetic in his disapproval of these protests, often using Twitter to criticize N.F.L. commissioner Roger Goodell and players who have knelt during the anthem. He even expressed his disapproval during a campaign rally in September for then U.S. Senate candidate Luther Strange in Alabama saying, “Wouldn’t you love to see one of these N.F.L. owners when somebody disrespects our flag to say ‘Get that son of a bitch off the field right now, out, he’s fired.’” In order to further demonstrate his point, he once more yelled, “He’s fired!” These comments sparked a new wave of protests the following Sunday, with entire teams kneeling during the playing of the National Anthem and other teams opting to remain in the locker room during the anthem altogether. Vice President Mike Pence went as far as to leave a Colts game when members of the teams knelt for the anthem before the game. 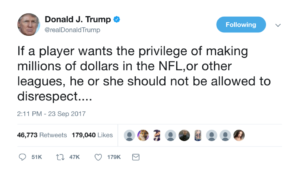 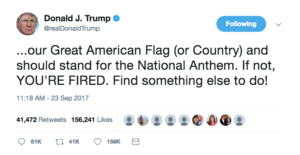 As the argument and disagreement have continued throughout the year, it’s become tough to say that sports and politics have been separate entities like they more often than not are, especially in regard to the N.F.L. For this reason, there are several members of the Philadelphia Eagles who are choosing to decline their invitation to the White House. Among those not attending is Torrey Smith, who raised his fist during the playing of the anthem and whose father served in the military. Smith stated, “We’re not protesting the anthem, it’s a protest during the anthem. I understand why people are mad, or may be offended when someone takes a knee. My father, when he dies, is going to be buried with an American flag draped around his casket, being that he served in the Army.”

Chris Long, who refused to visit the White House last season after winning a Super Bowl with the Patriots, will not visit this year with his new team the Eagles. He simply said he didn’t feel it was the right thing to do. Another player who won a Super Bowl last season with the Patriots and who now plays for the Eagles is LeGarrette Blount. Blount did not make the trip with the team last season but has not yet said if he will this year. Malcolm Jenkins has said he will not be in attendance at the White House either.

With these players choosing to skip this visit, they are once again choosing to practice their right to freedom of assembly that they are Constitutionally guaranteed. For whatever grievances either side may have, it is fortunate that both sides are allowed to express them however they choose. These players may not be visiting the White House, but we will certainly see them on the field next season. Or at Disney World.