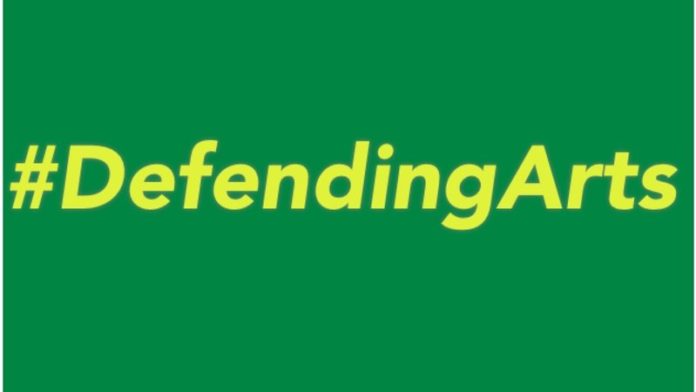 “We are the dancers, artists, musicians, writers, and actors of the future. We are being denied the chance to pursues our dream.”

This quote is the slogan of a new movement at Bryan Station High School, simply titled “#DefendingArts.”

Bryan Station is located just outside the heart of Lexington. Bryan Station has been looked at negatively by the community of Fayette County for a long time, this is due to violent events, such as vicious fights and a stabbing, that have happened over the last couple of years.

Bryan Station has tried to overturn the predisposition that citizens of Lexington have towards the school by starting a social media campaign titled, “#DefendingStation.” (This is where “#DefendingArts” came from.) So far it has worked, Bryan Station has gotten quite a bit of positive attention from The Lexington Herald-Leader, and Kentucky.com. This success can be attributed to the pride students, staff, and alumni have started publicly showing towards Bryan Station.

Though now that they have made these improvements it seems they [Bryan Station] may be taking a step backward.

Next year, Bryan Station plans to begin using academies in order to equip their students with what they need to be “College/Career Ready.” There is already an Information Technology Academy at Bryan Station. Currently, the academies that will be available are: an Engineering, Manufacturing, and Robotics Academy; The Academy of Leadership and Professionalism; The Academy of Information Technology; and The Academy of Medical Sciences and Human Services. As a student, all of these seem like they would be excellent tools to have at your disposal, and they are…for some students.

Art students at Bryan Station are outraged, to them it feels as though administration is saying that Science, Technology, Engineering, and Mathematics (STEM) fields are more viable to start a career in. At the beginning of a student’s sophomore year they will pick a major within one of the academies. While StationARTS, which is their [Bryan Station’s] current arts program, will still offer art classes to certain students, there is no College/Career readiness program for the Arts.

Transylvania junior and Bryan Station alumna Abigail Hamilton finds this situation discouraging and frustrating as well. She wrote the following in response:

“Encouraging a more college oriented pathway while simultaneously shutting down departments tells students that there are no opportunities in these fields. Had I not had the opportunity to explore my love for theater at Bryan Station, I would not have the scholarship that allows me to be at Transylvania. In a school that draws from the poorest areas of Lexington, students at BSHS need to be exposed to as much opportunity as they can in the hopes that they can receive scholarships that would allow them to go to college, if they so choose. Bryan Station has a wonderful population of students, who come from a multitude of backgrounds that contribute to the unique culture in the school. These students need the opportunity to express their experiences through the Arts so that they can see themselves as talented, well-rounded, and expressive students. The opportunity given to me at Bryan Station was life changing, and knowing that some students could potentially not experience these benefits is heart breaking. The Arts offer opportunity, and this is exactly what Bryan Station students need.”

There are plenty of viable careers in the arts and students should have the opportunity to learn more if they find they want to pursue a career in the arts. The fact that Bryan Station has decided that a Fine Arts Academy is not something that they would want in their school is discouraging. Not only to fine art supporters everywhere but to the students who may have had interest in pursuing Fine Arts in college or even as a career after high school.

Bryan Station has improved their Arts program, and their school in general, greatly just over the past three years. So it is a little disconcerting that Bryan Station would choose to do something that has affected so many students to the point that they decided to create a petition and launch a social media campaign to support the Fine Arts at Bryan Station.

This lack of support towards Arts education is nothing new in Kentucky though. When a state’s top officials denounce careers and studies in the Fine Arts, it can be expected that people will start to conform. People should be able to decide for themselves what they want to do, and what is important to them. The denunciation may deter some students from pursuing the arts, but the neglect is what keeps them from succeeding in the arts.

It is not fair that a student who decides to become an engineer gets the support and tools they need to succeed. However, when a student decides that they want to become an artist, musician, actor, etc, they find that people just try to discourage them and that the same resources that an engineer receives is not available to them.

Although there is a way to fight this, the most direct way being by signing this petition. Once this petition is signed by 1,500 people it will be delivered to James McMillian, the principal of Bryan Station High School, during a SBDM (Site Based Decision Making) council meeting.

“I truly believe that there is something within every human being that cannot be expressed with words…It is important to explore those parts of the human experience through the Arts, because there are simply no other ways to accomplish to do so. Cutting the arts program could potentially be closing the only window of opportunity that the students at BSHS have to being able to learn and experience the arts in an academic setting. These students who excel in the arts deserve to fine tune their talents and knowledge just as much as those who excel in mathematics and science.”

The idea of the academy system is revolutionary and very interesting. It is just frustrating and disappointing that Bryan Station decided that they should not give the Fine Arts the same resources as their STEM programs. It is time to start realizing that people are individuals, and art is a way of expressing one’s individuality.

As Hamilton, pointed out well, no one is asking for anything more, they are just asking for the same opportunity “to fine tune their talents and knowledge just as much as those who excel in mathematics and science.”